Home / Zerohedge / Google And Facebook To The Moon… Or Peak Advertising?

Google And Facebook To The Moon… Or Peak Advertising?

by
Capitalist Exploits
My articles My books
Follow on:Twitter
Summary:
By Chris at www.CapitalistExploits.at In the late 90's and early 2000's, I spent a lot of time travelling through a host of the world's airports. This naturally meant spending an inordinate amount of time staring at random people, wandering about aimlessly (no business class lounges when you're an impoverished backpacker living on noodles), and traipsing through ...

The Lockdown Wouldn’t Be So Devastating If Our Economy Wasn’t So Rigged, Brittle, & Exploitive

Johnstone: Prepare To Have Your Worldview Obliterated

In the late 90's and early 2000's, I spent a lot of time travelling through a host of the world's airports.

This naturally meant spending an inordinate amount of time staring at random people, wandering about aimlessly (no business class lounges when you're an impoverished backpacker living on noodles), and traipsing through duty free stores, puzzling on how it is woman can spend so much on perfume and men so much on big ugly watches.

Today, smart phones have come to rescue us but these things were far from ubiquitous back then. Instead, we had trusty newsstands. Remember them? Magazines and newspapers duelled it out for shelf space. Vanity fair, PC Magazine, New Yorker, the FT, you name it. 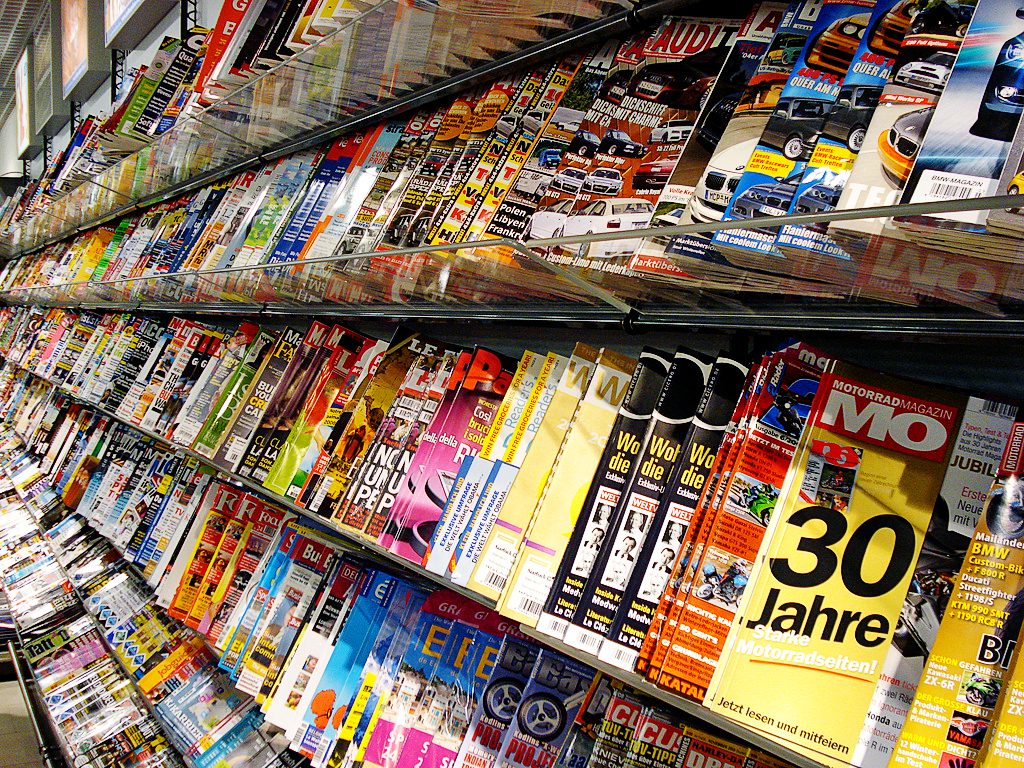 What kept the newsprint industry alive was advertising revenues.

When it came to newspapers, people bought them to read about the local politician caught fornicating with a ladyboy while on holiday in Bangkok... or to read about some girl named Mildred who had become a movie star after 70,000 auditions and how proud her parents were.

Nobody read them for the silly pictures of Marlboro man on a horse or for the pictures of some freshly-shaven suit flashing a Rolex while sipping champagne on a private jet. But we still had tons of ads because without them there'd have been no stories of Mildred or ladyboy antics. It's what kept the industry alive.

At its peak, ad rates were astronomical, but the only way to tell people about a new computer was to buy a page in Computer Shopper. And the only way the suits at Goldman Sachs could let you know they were there to guide you through the complexities of the market was to buy a full page in the FT.

Then it all imploded.

The internet has been at once the greatest and the most destructive commercial invention in media history. They said it couldn't happen. Then it did. Playboy? Dead. Rolling Stone? Buried. Citadel? Whoosh!

Two decades ago, if you were an editor at a large rag, you were king of the world. Expense accounts, lavish office space, wielding Schwarzenegger-like power with every institution grappling for your attention. Today, if you're still alive, you're bandaging your business together... and you've already taken everything online. But guess which god you're now praying to?

This chart is a couple years old but shows the overall makeup of the ad market. 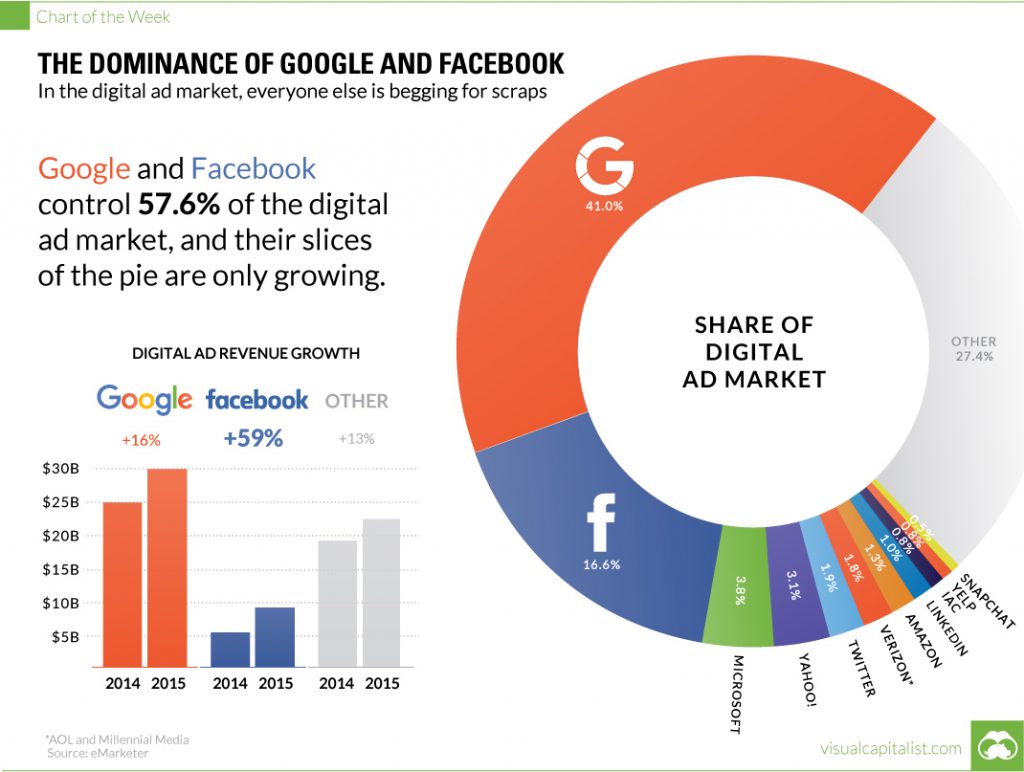 And here's the stellar growth of ad revenue for Google. 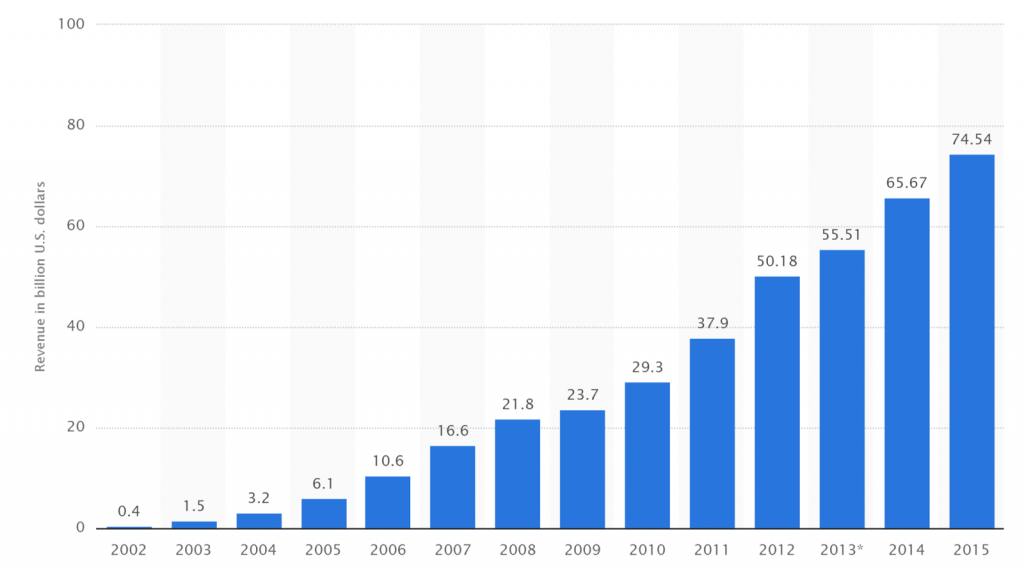 It's been a helluva run for both: 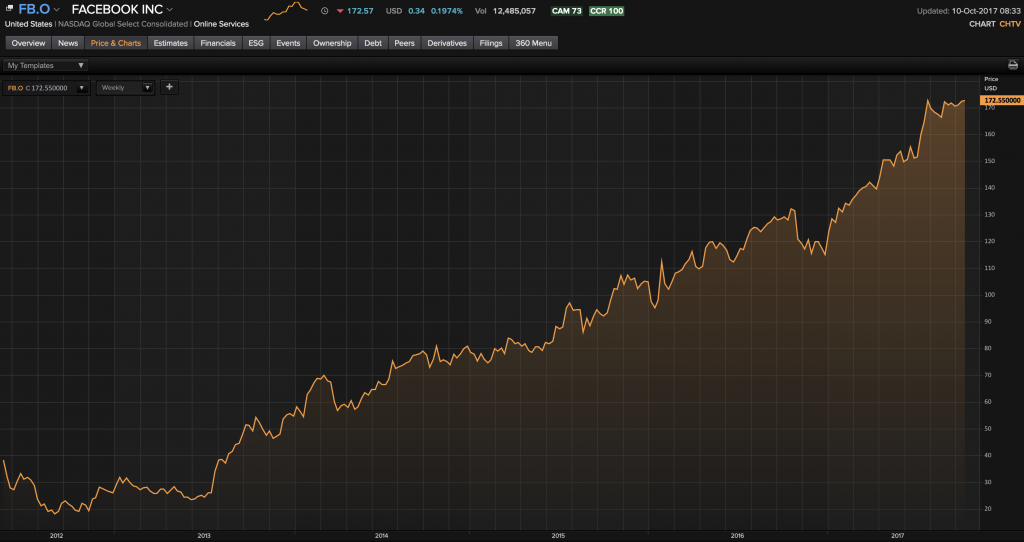 For their part, investors clearly aren't paying for revenues. A forward price to cash flow of 19.71x? Ouch!

And the big boy, Alphabet: 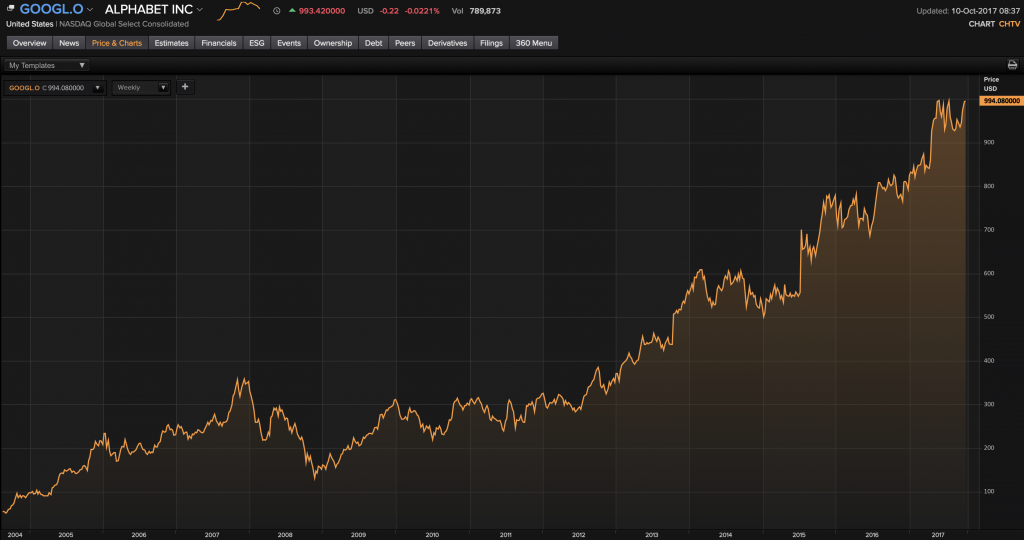 Based on the numbers...investors are buying "Growth".

Benjamin Graham wouldn't be turning over in his grave. He'd be backflipping.

So are we to sail into the sunset with Google and Facebook leading the charge in the advertising space? For how long?

Or is there a coming pressure on ad revenue, meaning millennials will find themselves carrying catheters around and playing bingo to a different world... one not ruled by these two? Or could it all happen even sooner than that?

Ad growth can take place by acquiring new markets as well as maintaining existing revenues. If you're adding new customers while existing ones are dropping off faster or even at the same pace as additions, you're a hamster on a wheel, and that "growth" that investors are currently paying such a premium for risks being repriced.

Here at Capitalist Exploits HQ there isn't a week that goes by without Natasha, or Henry, or Alec (this week's one) hitting me up with the promise that I can grow my business much faster with SEO/UX/CRM and ad spending with Google, Facebook, and a bunch of other "social media" juggernauts".

I don't begrudge these folks. They're just trying to make a crumb. But unfortunately that usually means promising me they know just the tricks of the trade, and I can pay them to place ads for me and "manage" my online presence. The ROI will come, I just need to be patient. Maybe they're right, but I doubt it. Know why?

I've spoken with many others running online businesses, and you'd have more luck finding the yeti than anyone who's had the ability to say with certainty that any of their ad spend is driving meaningful numbers over and above dollar spend. Site hits? Sure. But no conversions.

It's a world of obfuscation with the promise of gold always lurking over the horizon... but never in reach.

A while ago a company run by some friends spent a godawful amount with what is the equivalent of Google's SAS.

The promise from the Google boys was it'd pay off in a big way — just be patient — and it required a substantial downpayment.

That was nearly a year ago, and the patience has long since worn off. For an excellent breakdown on the murky world of ad trading, I'd strongly suggest Raoul Pal's GMI report on the topic, which you can find by signing up to Real Vision TV.

I agree with Raoul when he says:

I think that as this story develops, Google and Facebook will begin to come under pressure. They are making super - normal profits based on total sham. They aren’t the villains but they own the eco-system and they clearly can’t be left in charge of it.

In the past, I hired an advertising agency who were considered "best in biz" to build a landing page for me and run a campaign complete with targeting traffic (which I paid for separately) for an event I was hosting.

The results where absolutely hopeless, and after three months and about US$15,000 down it was clear to me there was only one group making money on this gig... and it wasn't the guy I saw in the mirror.

I fired them, took down the landing page, sat down, and wrote a short message to my existing list. No special copywriting skills, or emotional wording. Nothing. Just what I was up to. Bam! Success. Weird, heh?

Now, I realise that my data sample is admittedly tiny in the grand scheme of things, but the thing is I've enjoyed substantial organic growth (thanks to you readers for sharing my content with friends). But the targeting ad side, while only done a couple of times, has been spectacularly useless 100% of the time.

I remembered all of this when last week I came across this article about Procter & Gamble's dialling back on ad spend.

We will vote with our dollars and will not waste our money on a crappy media supply chain—so we can invest in what really matters—better advertising and innovation to drive growth.

P&G's Marc Pritchard was pretty frank in a speech given at the Interactive Advertising Bureau’s annual leadership meeting in Hollywood earlier this year.

Frankly, there’s, we believe, at least 20 to 30 percent of waste in the media supply chain because of lack of viewability, nontransparent contracts, nontransparent measurement of inputs, fraud and now even your ads showing up in unsafe places,

He has given the duopoly a one year ultimatum to clean up their act or risk losing P&G's 2018 budget.

P&G are not the only ones as they're joined by Unilever and Bank of America to name a few.

Digging deeper I found this from a few months back:

French advertising giant pulls out of Google and YouTube

The problem that humans have is that we need data to understand and make rational decisions.

The entire digital advertising industry has been so new and so fast-moving that businesses haven't had the time to accumulate meaningful data on which to make calculated rational decisions.

Additionally, the dynamic has been changing so quickly that what may have worked for a few months suddenly no longer works. It's been like trying to fit a hubcap on a moving car. You just get chewed up.

The rush to get, gain, and retain "online presence" has led to a FOMO and subsequent massive boom in ad agencies and, of course, social media companies themselves.

Attempting to value the ad spend companies have opted to just spraying money at ad agencies in the hope that they know what the hell they're doing. Investors, finding it impossible to value companies such as Google and Facebook, have chosen instead to just spray money at them buying the "growth".

There are a couple that spring to mind:

It's coming and here's why.

Whether or not you believe that the Russians are hacking US elections or not is missing the point. Believing that foreign governments don't or aren't trying to influence elections is naive at best and deluded at worst. And this goes for all governments.

That manipulation no longer takes place via newsprint journalism. Today it's Twitter, Facebook, and Google where the battleground lies. Right now, it's the Wild West.

China has already banned and regulated both. Facebook isn't allowed and Google is hamstrung. In Europe, Zuckerberg is increasingly regulated. The US remains relatively untouched, but I think the trend will assert itself. Importantly, as an investor, it's clear to me that right now none of this is priced into these stocks all the while they're sporting valuations that cause blood to shoot from the eyes of value investors.

As mentioned above, the industry chorus is growing louder and louder.

Every business model matures, and Google and Facebook's is no different. Businesses have had over a decade now to analyse ad spend and ROI. When entire industries find they can no longer square spending with ROI, we're likely to see them seeking alternatives. It's tough to envision this being good for either of these two.

"Customers will realise that the elusive holy grail of digital advertising nirvana is a total sham where everyone is being scalped, returns are virtually non-existent, the system is totally rigged against them and everyone else is getting rich off the back of it." — Raoul Pal

Capitalist Exploits exists as a meeting place for investors, entrepreneurs and those managing their capital in a world increasingly perverse and riddled with dangerous thoughts.
My articlesMy books
Follow on:Twitter
Previous Illinois Debt Crisis Deepens As Comptroller Admits No Idea What True Balance Of Outstanding Bills Is
Next “This Is The Craziest Mortgage Scheme I’ve Ever Seen”