The US, China, and Russia: Grand Strategies Part 2

by
Marc Chandler
My articles My siteAbout meMy booksMy videos
Follow on:TwitterLinkedIN
Seeking Alpha
Summary:
(part 1 can be found here) The strategists in the Pentagon must be gaming out the possibility that when Russia invades Ukraine, China moves on Taiwan. While this may make sense to weekend warriors, it does not seem sound strategically. Why would Beijing allow Moscow to determine its timetable? And Moscow's timetable is partly weather-related, which does not concern the People's Liberation Army.   It is not as if US forces would be divided. For all practical purposes, the US has ruled out a direct military response to a Russian invasion of Ukraine. Instead, it threatens various sanctions. Some could cut deeply, like banning trading or owning Russian sovereign debt, sanctioning the large state-owned banks, and restricting dollar-ruble transactions.   On the other hand, the US appears to be 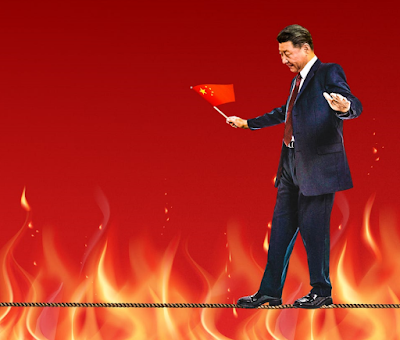 The strategists in the Pentagon must be gaming out the possibility that when Russia invades Ukraine, China moves on Taiwan. While this may make sense to weekend warriors, it does not seem sound strategically. Why would Beijing allow Moscow to determine its timetable? And Moscow's timetable is partly weather-related, which does not concern the People's Liberation Army.

It is not as if US forces would be divided. For all practical purposes, the US has ruled out a direct military response to a Russian invasion of Ukraine. Instead, it threatens various sanctions. Some could cut deeply, like banning trading or owning Russian sovereign debt, sanctioning the large state-owned banks, and restricting dollar-ruble transactions.

On the other hand, the US appears to be gradually ratcheting up its rhetoric about Taiwan. Last month, the Assistant Secretary of Defense for Indo-Pacific Security Affairs told a Senate committee that Taiwan was strategically critical to the region's security and to the defense of US interests in the Indo-Pacific. President Biden's comments had to be walked back or clarified in his first year in office several times. His lapses were always in the same direction. With US military boots on the ground in Taiwan in an advisory capacity and the escalating rhetoric, the US is threatening to change the status quo as much as Beijing's aerial harassment campaign.

China is abandoning its minimal deterrence nuclear strategy.  It is over-determined, meaning that such a momentous decision is an expression of several forces.  As China becomes wealthier, it is ought not to be surprising that it looks to expand its military forces.  Unlike the US, where even in an age of hypersonic weapons, the two oceans offer it protection that few other large countries have, China is in a dangerous neighborhood.  North Korea and India (and Russia) have nuclear weapons.  Also, from Beijing's perspective, an aggressive US stance toward Taiwan, and its attempt to build a coalition to "contain China," a stronger nuclear presence will minimize the risk of being dominated in an escalation ladder in the region. In addition, the development of US missile defenses requires whatever was a minimal deterrence before to be somewhat larger now to be effective.

The media quotes experts suggesting China could have 700 warheads in five years and 1000 by the end of the decade.  The US defense establishment reportedly was caught off-guard by the rapid Chinese build-up.  This may have something to do with its exaggerated response.  US Dr. Strangelovian logic thought that if Washington pursued overwhelming superiority, maximum deterrence, and without a pledge of "no first-use," Beijing would stick to its minimal deterrent.  Suppose China acquires those warheads.  Assuming the US does not expand its forces, it will still have four-times more than China.

Former US Secretary of State Pompeo talked about the need for regime change in China.  Such allusions would seem to strengthen the hardliners in Beijing.  Imagine the response in the US if China made such declarations. Through its Belt and Road Initiative, loans, and trade ties, China is securing a beachhead in South America and the Caribbean (Cuba. Jamaica, Barbados).  The Regional Compressive Economic Partnership that it sponsored formally went it effect at the start of the year.  It includes Japan and South Korea, something incidentally that the TPP (and now CPTPP) did not achieve.

The Biden administration has floated the idea of a new initiative in the region, but so far it seems ill-defined hodgepodge of different areas of cooperation, including supply chains, export controls, and standards (such as in artificial intelligence and bioengineering).  It raises at least two questions.  First, substantively, is it just trying to play catch-up after the retreat from the TPP and is it possible to offset the US declining trade importance as regional trade increases.  Second, procedurally, the checks and balances of the US political system allow for two ways that a deal can be struck: With the consent of the Senate, which is an arduous path, or an executive agreement, which, while easier to secure, is easier to unwind, and hence less credible.

The legitimacy of the political and economic elite rests on a different type of competition that is being played out. It is for the hearts and minds and may arguably be the decisive theater.  The way to people's hearts and minds is not going to be through ideology of collectivism or individualism. Ultimately, it may be via the stomach, so to speak.  Will people's lives and the lives of their children be better?   In the US, with GDP per capita of around $63.5k, the traditional answer has been yes.  However, distributional issues and declining social mobility make it a more difficult call now, let aside the environmental degradation.

In 1980, China’s GDP per capita was less than $200.  Now it about $10.5k, edging above Russia, and easily surpassing Mexico and Brazil.  The Chinese Communist Party delivered the goods.  The question is whether Xi attempts to roll back what he sees as the excesses of Deng Xiaoping's reforms kills the proverbial goose that laid the golden egg. It is sometimes cast as a social contract of sorts which in exchange better lives (material well-being, modern medicine, increasing longevity, etc.), political and social power was concentrated in Communist Party, a mass organization by Western standards, and one in which capitalist have been allowed to become members.

The line between the public and the private is blurred by the new technology and social media.  Data security and privacy has become much more salient for more people and businesses. In the US, one's life chances are strongly influenced by one's socio-economic status. In totalitarianism, the line between the private and public does not exist.  In a short span, China has gone from limiting households to one child to using the state and party apparatus to pressure women to have three.  The pressure takes many forms, including limiting access to birth control, abortion, and work opportunities.  The length of hair of cultural figures, songs that are proper for karaoke, and tattoos of athletes are examples of what in the US is regarded as private decisions that have come under the scrutiny of China's Communist Party.  On the other hand, Chinese officials may see these decisions as ultimately social, and in the US, are driven by the dictatorship of the market, which has increasingly concentrated economic power.

Representative governments and modern totalitarian regimes face several similar challenges.  National security is paramount.  Remember that in the name of national security, the US imposed tariffs on steel and aluminum from other representative governments who are allies, like Canada, the EU, the UK, Japan, and Mexico.  Biden has not negotiated their full unwind yet (e.g., Japan and the UK).

The concentration of income and wealth poses various social and political challenges in the West and China.  Under Covid, we have seen how poverty (i.e., limited access to health care, consumer/health education, and access to food at affordable prices) is itself a comorbidity.  The security of private data also raises important questions regardless of a country's political structure. There appears to be a wide range of accommodations that are possible but elites, whether elected or not, must ensure a better life for more people, or face ultimate rejection.

He has been covering the global capital markets in one fashion or another for more than 30 years, working at economic consulting firms and global investment banks. After 14 years as the global head of currency strategy for Brown Brothers Harriman, Chandler joined Bannockburn Global Forex, as a managing partner and chief markets strategist as of October 1, 2018.
My articlesMy siteAbout meMy books
Follow on:TwitterLinkedINSeeking Alpha
Previous Treasury Yields Continue to Move Higher
Next The US, China, and Russia: Grand Strategies Part 1