Home / Humble student of the markets / The Fed’s inflation problem

by
Cam Hui
My articles My siteMy booksMy videos
Follow on:TwitterLinkedINGoogle +
Seeking Alpha
Summary:
Preface: Explaining our market timing models  We maintain several market timing models, each with differing time horizons. The “Ultimate Market Timing Model” is a long-term market timing model based on the research outlined in our post, Building the ultimate market timing model. This model tends to generate only a handful of signals each decade. The Trend Asset Allocation Model is an asset allocation model that applies trend following principles based on the inputs of global stock and commodity price. This model has a shorter time horizon and tends to turn over about 4-6 times a year. The performance and full details of a model portfolio based on the out-of-sample signals of the Trend Model can be found here. My inner trader uses a trading model, which is a blend of price

Marc Chandler writes The Greenback has Abruptly Fallen Out of Favor

We maintain several market timing models, each with differing time horizons. The “Ultimate Market Timing Model” is a long-term market timing model based on the research outlined in our post, Building the ultimate market timing model. This model tends to generate only a handful of signals each decade.
The Trend Asset Allocation Model is an asset allocation model that applies trend following principles based on the inputs of global stock and commodity price. This model has a shorter time horizon and tends to turn over about 4-6 times a year. The performance and full details of a model portfolio based on the out-of-sample signals of the Trend Model can be found here.

My inner trader uses a trading model, which is a blend of price momentum (is the Trend Model becoming more bullish, or bearish?) and overbought/oversold extremes (don’t buy if the trend is overbought, and vice versa). Subscribers receive real-time alerts of model changes, and a hypothetical trading record of the email alerts is updated weekly here. The hypothetical trading record of the trading model of the real-time alerts that began in March 2016 is shown below. 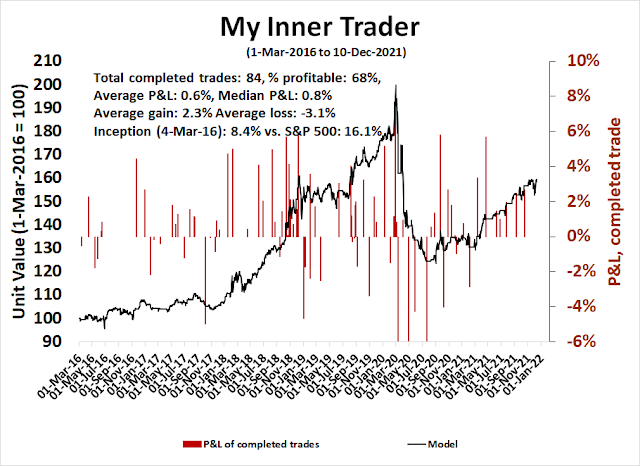 The latest signals of each model are as follows:

Update schedule: I generally update model readings on my site on weekends and tweet mid-week observations at @humblestudent. Subscribers receive real-time alerts of trading model changes, and a hypothetical trading record of those email alerts is shown here.

Subscribers can access the latest signal in real-time here.

A data and political problem

The S&P 500 experienced an air pocket in late November, sparked by a combination of the news of the emergence of the Omicron virus variant and the Fed’s hawkish surprise. Since then, the Omicron news has been mostly benign. While the new variant is more transmissible, its effects appear to be less severe. Pfizer and BioNTech reported that lab tests showed that a third dose of its vaccine protected against the Omicron variant. A two-dose regime was less effective but still prevents severe illness. With the Omicron threat off the table, the market staged a strong relief rally.
The second threat of a hawkish Fed still remains. As investors look ahead to the FOMC meeting next week, the Fed faces both a data and political inflation problem. The data problem is that inflation surprise is surging all around the world. 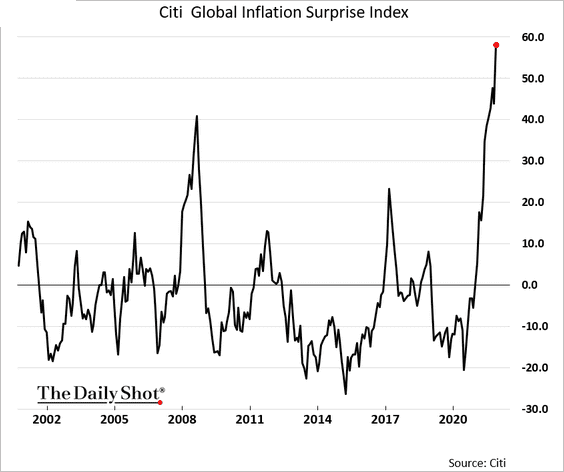 The closely watched November CPI report came in in line with market expectations, which was a relief for the equity markets. The S&P 500 responded by rallying to a marginal new all-time high. The Dow and the Transports are holding their previous breakouts. 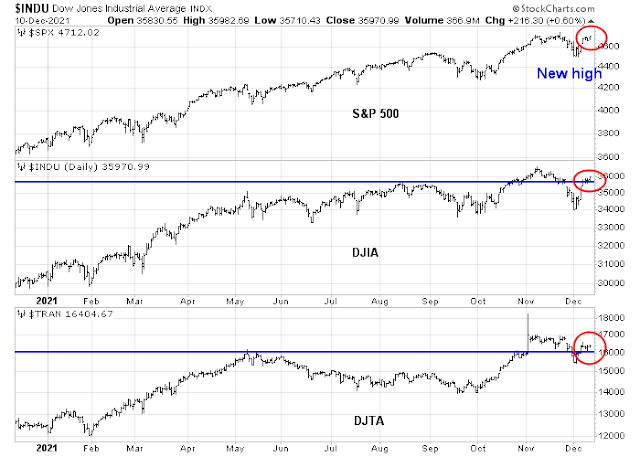 Despite the market’s relief, there may be further upside pressure on CPI in the coming months. While airfares, used cars, and energy prices are noisy, volatile, and transitory components that have boosted CPI, Owners’ Equivalent Rent (OER) is a large weight in CPI and its outlook is concerning. 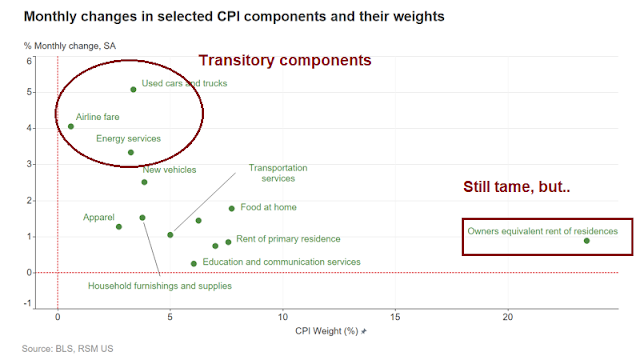 While OER (red line) has been relatively tame, it has historically lagged housing prices by about 12 months. If history is any guide, OER should start to rise next summer, a year after housing prices began their upward climb.

While the Fed is in theory independent from Congress and the White House, it nevertheless faces a political problem of rising inflation. This can be summarized by the recent plunge in consumer sentiment. For years, consumer sentiment (blue line) and the unemployment rate (red line, inverted) tracked each other closely. Their recent divergence is an indication that households are becoming less concerned about employment than other economic factors, especially when initial jobless claims printed a half-century low last week. The latest University of Michigan survey tells the story of a dramatic shift in consumer focus.

It can also be explained by the Misery Index, which is the sum of the unemployment rate and inflation (black line, inverted). In the post-COVID Crash era, the Misery Index and consumer sentiment track each other more closely, indicating that households are increasingly concerned about inflation.

These political pressures undoubtedly played a role in the Fed’s recent hawkish pivot. In the wake of Jerome Powell’s Senate testimony, the market is now anticipating that the Fed will announce doubling the pace of its QE taper. At the new anticipated pace, the Fed’s asset purchases will end in March, which allows the Fed the flexibility to begin raising rates at the May FOMC meeting.
While investors will be closely watching the pace of the taper, another key indicator to monitor is the dot-plot and the long-term neutral Fed Funds rate. Former New York Fed President Bill Dudley wrote in a Bloomberg Op-Ed that he expects three rate hikes in 2022 and the long-term neutral rate should be as high as 2.5%.

For 2022, I expect a median forecast of 0.8%. This would signal three 0.25-percentage-point increases next year – not so many as to require a rate hike in March, but enough to be consistent with the faster taper and the unemployment and inflation outlook.
For 2023, I expect officials to project four more rate hikes, taking the median target rate to 1.8% a year earlier than in the September projections. Such gradual, consistent tightening makes sense once the Fed gets started. But policymakers aren’t likely to anticipate moving more quickly as long as they project inflation to remain below 2.5%.
For 2024, I expect the projected target rate to reach the 2.5% level judged as neutral. Anything less seems hard to justify, given that the economy will have been running beyond full employment and above the Fed’s 2% inflation target for several years.

If the Fed were to follow the trajectory laid out by Dudley, the yield curve would flatten and invert by late 2022 or early 2023, which would be an early signal of a recession – and recessions are bull market killers.

Reasons to be bullish

From a technical perspective, the combination of Omicron news and November CPI print represents a short-term bullish dynamic for stock prices.
The bulls can point to the strong rebound after a series of severely oversold market conditions and panicked sentiment readings. All components of my market bottom models flashed buy signals at the height of the market weakness when the S&P 500 tested its 50 day moving average. 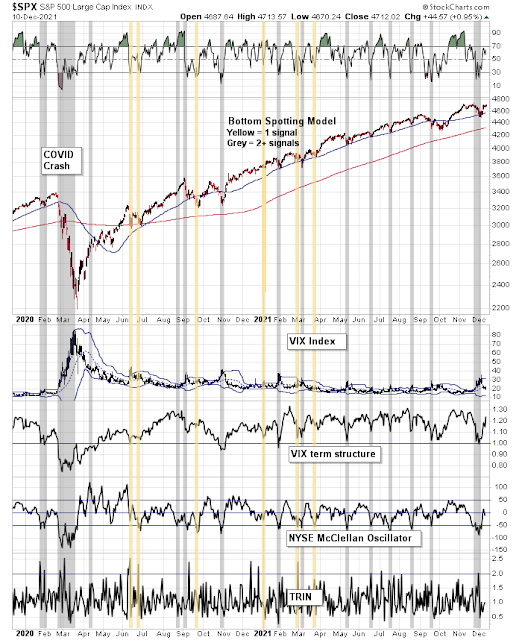 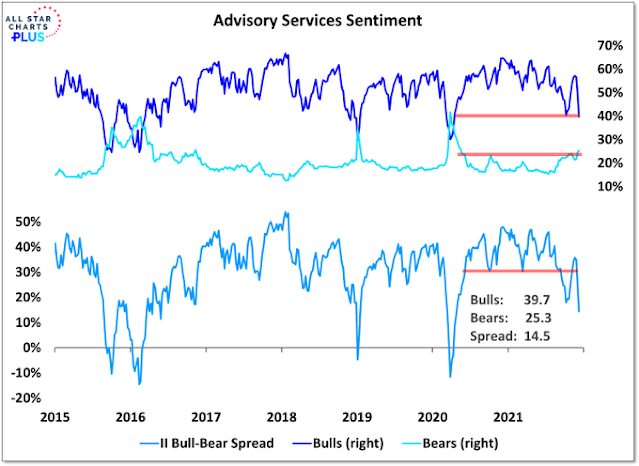 Similarly, the Citi Panic-Euphoria Model has come off the boil. While readings are still in euphoria territory, they are nowhere as extended as they have been in the past year. 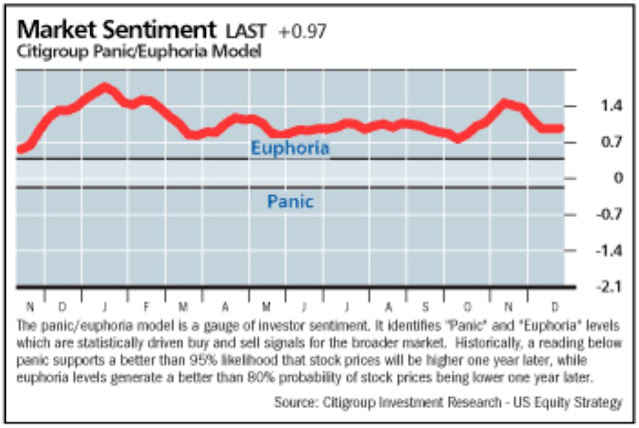 In many ways, the relief rally was no surprise. Historically, the S&P 500 has shown strong returns whenever the VIX Index spiked above 30, indicating fear. 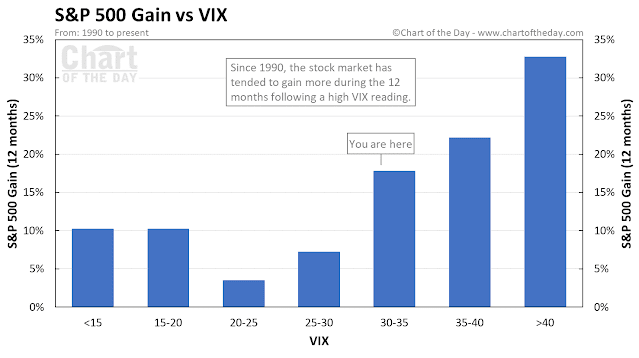 The ensuring rally exhibited strong price momentum. A recent backtest of similar momentum readings showed strong returns. Recently, 80% of S&P 500 stocks were at 5-day highs and the 50 dma was above the 200 dma. There have been only 29 similar instances in the last 30 years. History shows that the market was up an average of 14.3% a year later with a 90% success rate. Average drawdown was only -6.1%. 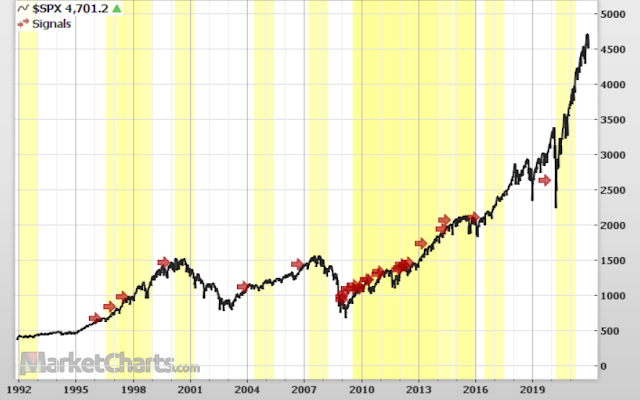 Notwithstanding those momentum results, the market is undergoing a possible setup for a rare Zweig Breadth Thrust buy signal. ZBT buy signals occur when market breadth surges from an oversold to an overbought condition with 10 trading days. The last day in the window is Wednesday or the day of the FOMC meeting. 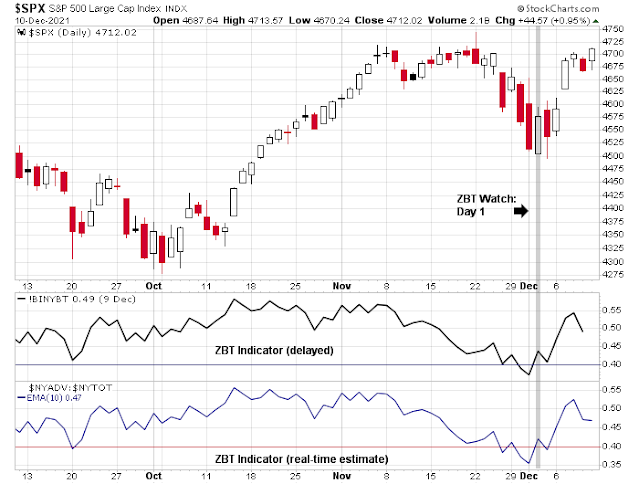 Another consideration to keep in mind is seasonality. Seasonality is only of secondary importance as prices are affected by other factors and seasonality charts only show average returns without any recognition of wide historical variations. This year, the market tracked the seasonal pattern well until Thanksgiving. On average, the market begins to weaken now and begins a Christmas rally about mid-December. 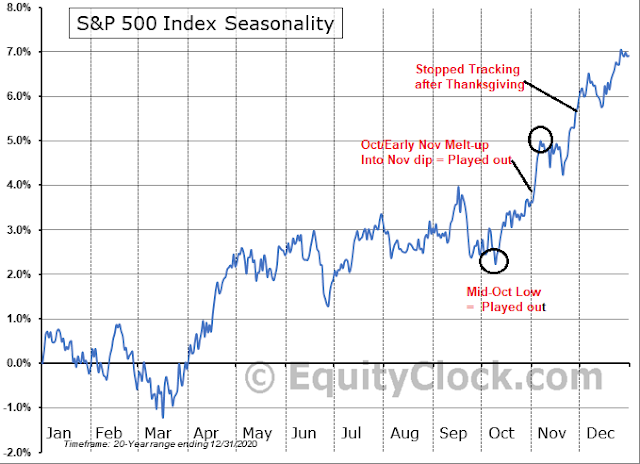 In conclusion, the stock market has shrugged off both the Omicron scare and the Fed’s hawkish pivot scare. My base case scenario calls for further gains until year-end, though traders should be prepared for some FOMC related volatility next week.
Disclosure: Long SPXL
2021-12-12
Cam Hui
Full story here
Are you the author?
0 0

Cam Hui has been professionally involved in the financial markets since 1985 in a variety of roles, both as an equity portfolio manager and as a sell-side analyst. He graduated with a degree in Computer Science from the University of British Columbia in 1980 and obtained his CFA Charter in 1989. He is left & right brained modeler of quantitative investment systems. Blogs at Humble Student of the Markets.
My articlesMy siteMy books
Follow on:TwitterLinkedINGoogle +Seeking Alpha
Previous China gets rich AND old, but…
Next Hawkish expectations

A Liquidity Crunch & Volatility Surge is Coming in 2022