Home / Humble student of the markets / Will the energy price surge cause a recession?

Will the energy price surge cause a recession?

by
Cam Hui
My articles My siteMy booksMy videos
Follow on:TwitterLinkedINGoogle +
Seeking Alpha
Summary:
As energy prices surged around the world, I had an extensive discussion with a reader about whether the latest price spike could cause a recession. This is an important consideration for investors as recessions are equity bull market killers.  The evidence isn’t clear. On one hand, every recession in the post-War period (shaded grey zones) has been accompanied by rising oil prices. On the other hand, interest rates were also rising in virtually all of the cases. Oil shocks and recessions The guru of oil shocks and recessions is James Hamilton, whose 1983 seminal paper “Oil and the Macroeconomy Since World War II” provided the basis for this research. Hamilton has published extensively on the topic. A 2011 paper, “Historical Oil Shocks”, laid out the history of oil shocks and

As energy prices surged around the world, I had an extensive discussion with a reader about whether the latest price spike could cause a recession. This is an important consideration for investors as recessions are equity bull market killers.

The evidence isn’t clear. On one hand, every recession in the post-War period (shaded grey zones) has been accompanied by rising oil prices. On the other hand, interest rates were also rising in virtually all of the cases.

This paper surveys the history of the oil industry with a particular focus on the events associated with significant changes in the price of oil. Although oil was used much differently and was substantially less important economically in the nineteenth century than it is today, there are interesting parallels between events in that era and more recent developments. Key post-World-War-II oil shocks reviewed include the Suez Crisis of 1956-57, the OPEC oil embargo of 1973-1974, the Iranian revolution of 1978-1979, the Iran-Iraq War initiated in 1980, the first Persian Gulf War in 1990-91, and the oil price spike of 2007-2008. Other more minor disturbances are also discussed, as are the economic downturns that followed each of the major postwar oil shocks.

Here is a brief summary starting from the 1970’s.
Attributing a rising oil price to the 2008 recession was especially surprising. A WSJ article outlined Hamilton’s explanation:

But then again, maybe what happened to oil prices had something to do with credit markets seizing up. The housing bubble saw people of lesser means traveling further afield to buy homes. That gave them long commutes that they were able to afford when gas was $2 a gallon, but maybe they couldn’t at $3. Housing in the exurbs got hit hardest, and one reason why is that high gasoline prices made it hard for people to lived in them to keep up with their mortgage payments, and hard for them to sell their homes without taking a steep loss. In some meaningful way, that has to have contributed to mortgage problems.

Current conditions appear ominous. Global energy inflation is off the charts in many regions. Natural gas prices are surging in Europe and Asia. Bloomberg reported last week that the latest spike is equivalent to a $190 oil shock.

On Thursday, the Japan-Korea Marker, North Asia’s benchmark for spot liquefied natural gas shipments, surged to $34.47 per million British thermal units, the highest on records going back to 2009, according to price reporting agency S&P Global Platts. Converting that into oil units, also gives a price of about $190 per barrel of oil equivalent.

European natural gas prices also spiked based on historically low storage levels going into the winter and the recent unreliability of renewable energy sources. Price pressure was partly relieved when Putin offered more gas exports, though the offer implicitly came with a string of quick approval of the Nord Stream 2 pipeline.

Is a global energy-induced recession in our near future?

Exploring cause and effect

At first glance, the Hamilton studies are highly convincing. A 2014 Federal Reserve study looked at the data and asked a different question. It is true that every recession has been accompanied by an oil price spike, but do oil price spikes predict recessions? (If every Ford Model-T is black, are all black cars are Fords?)
The researchers modeled the effects of changes in oil price in a linear fashion, e.g. running a simple regression of oil price changes to future GDP changes, and in a nonlinear way, e.g. model positive and negative oil shocks differently. The GDP growth effects of oil price changes in the nonlinear model was much larger than the linear model.

There was, however, an important caveat to the nonlinear model [emphasis added].

In other words, recessions don’t always follow oil shocks in the nonlinear model. It depends. On the other hand, the oil shock effects on growth are very modest, which leads to the conclusion that oil prices don’t matter very much in the causation of recessions.

A 1997 paper by Bernanke, Gertler, and Watson, “Systematic Monetary Policy and the Effects of Oil Price Shocks”, came to a similar conclusion. Bernanke et al noted that oil shock recessions were accompanied by rising interest rates. They went on to ask the question, “Is it the oil shock or the rising rates that caused the subsequent recession?” The answer turns out to be monetary policy played a much bigger role.

We find that the endogenous monetary policy response can account for a very substantial portion (in some cases, nearly all) of the depressing effects of oil price shocks on the real economy. This result is reinforced by a more disaggregated analysis, which compares the effects of oil price and monetary policy shocks on components of GDP. Looking more specifically at individual recessionary episodes associated with oil price shocks, we find that both monetary policy and other nonmoney, nonoil disturbances played important roles, but that oil shocks, per se, were not a major cause of these downturns.

The current surge in prices is attributable to a transition to clean power. While the global economy has dealt with supply squeezes and volatile energy prices in the past, the transition process has exacerbated volatility, which is here to stay over the next decade. Policymakers have discovered the fragility of renewable power. The sun doesn’t always shine. The wind doesn’t always blow. The rain doesn’t always fall. Storage is an issue and so is power grid capacity. Price shocks, both up and down, will be inevitable during the adjustment process.

Does that mean there is an energy-induced recession in the near future? It’s unlikely.

James Hamilton has argued that rising gasoline prices act as a tax for consumers, and the increase at the pump may have pushed an already fragile economy into recession in 2008. Today, household balance sheets are strong. While higher energy prices could slow consumer spending, they are unlikely to push the economy into recession.

In conclusion, rising energy prices are unlikely to cause a recession in the near future, though they may act as a brake on consumer spending. The global economy is the process of normalizing after a sudden shock. Fiscal and monetary policy are easy and supportive. Investors should position themselves for the upcoming growth phase by overweighting cyclically sensitive stocks in the portfolio.

The accompanying chart shows sector earnings sensitivity to real GDP growth. Two of the top three sectors are classified as value and one, communication services, is growth. However, the recent Facebook whistleblower revelations leave the communication services sector vulnerable to antitrust regulation and oversight risk.

This analysis wouldn’t be complete with some final words about energy stocks. The energy sector has a number of attractive contrarian characteristics. The clean energy transition has made the sector the new tobacco. Companies are reluctant to invest significantly in capex in light of net-zero initiatives, which is reducing production capacity as cyclical demand rises during the economic recovery. As an example, coal stocks, which is the dirtiest of energy sources, have soared. 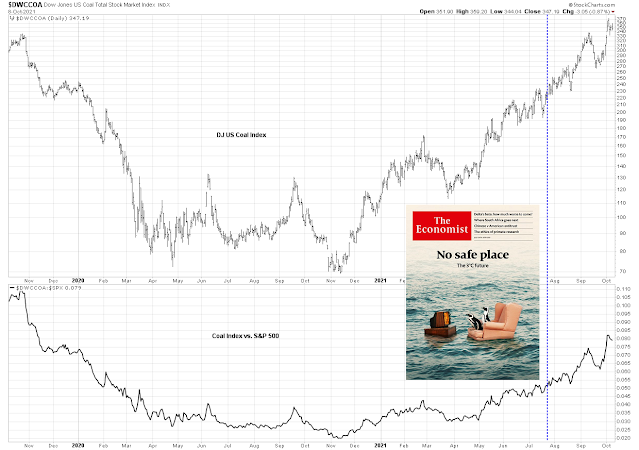 In the short term, oil and gas stocks are highly extended and testing both absolute resistance and relative resistance. While this sector is attractive from a macro viewpoint over the next few years, investors are advised to wait for a pullback before committing funds to these stocks. 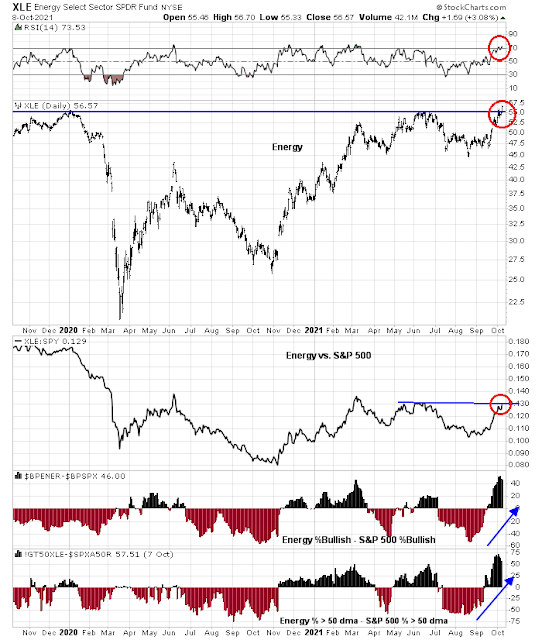 Cam Hui has been professionally involved in the financial markets since 1985 in a variety of roles, both as an equity portfolio manager and as a sell-side analyst. He graduated with a degree in Computer Science from the University of British Columbia in 1980 and obtained his CFA Charter in 1989. He is left & right brained modeler of quantitative investment systems. Blogs at Humble Student of the Markets.
My articlesMy siteMy books
Follow on:TwitterLinkedINGoogle +Seeking Alpha
Previous Unsettling news from Crypto-Land
Next What rhymes with 2011?