Home / Humble student of the markets / How far can the market fall?

How far can the market fall?

by
Cam Hui
My articles My siteMy booksMy videos
Follow on:TwitterLinkedINGoogle +
Seeking Alpha
Summary:
Macro Charts recently observed that S&P 500 DSI is turning down from an overbought extreme. Historically, that has led to either sharp corrections or a prolonged period of choppiness. In light of these conditions, I have been asked about downside equity risk. Is this the start of a significant downdraft? How far can stocks fall from current levels? I answer these question in the context of secular leadership change. The Big Three market leadership themes in the latest bull cycle has been US over global stocks, large cap growth over value, and large caps over small caps. Transitions from bull to bear phase act to cleanse the excesses of the previous cycle. Until we see definitive signs of leadership changes, it may be too early to call a market top just yet. From that

Macro Charts recently observed that S&P 500 DSI is turning down from an overbought extreme. Historically, that has led to either sharp corrections or a prolonged period of choppiness.

In light of these conditions, I have been asked about downside equity risk. Is this the start of a significant downdraft? How far can stocks fall from current levels?

I answer these question in the context of secular leadership change. The Big Three market leadership themes in the latest bull cycle has been US over global stocks, large cap growth over value, and large caps over small caps. Transitions from bull to bear phase act to cleanse the excesses of the previous cycle. Until we see definitive signs of leadership changes, it may be too early to call a market top just yet.

From that perspective, we can see that the relative performance of US against global stocks is consolidating sideways after an uptrend; growth beating value, but pulling back; and small caps still lagging large caps after a brief episode of better relative performance.

There are growing, but unconfirmed signs that large cap growth and NASDAQ stocks are weakening. The NASDAQ 100 recently breached its rising trend channel, but its performance compared to the S&P 500 remains in a relative uptrend. In the short run, too much technical damage has been inflicted on these market leaders for them to continue to roar upwards immediately. The most constructive bullish scenario would see them consolidate sideways for several months before resuming their uptrend.

We can see further evidence of technology weakness from small cap tech stocks. Even as the relative performance of large cap tech against the S&P 500 pulled back but remains in a relative uptrend (black line top panel), small cap tech has dramatically underperformed the Russell 2000 (green line, top panel). These are all signals that an important correction may be brewing for the technology sector.

If this is indeed the start of a NASDAQ crash, bear in mind Bob Farrell’s Rule #4 as it applies to NASDAQ stocks: “Exponential rapidly rising or falling markets usually go further than you think, but they do not correct by going sideways.”

Let’s consider what happened last time these stocks deflated. The bear market spared mid and small cap stocks because they did not participate in the dot-com bubble. Non-US stocks crashed along with the NASDAQ because they were also caught in the tech frenzy. Fast forward to 2020, non-US stocks are likely more insulated from a potential NASDAQ crash today as they have gone nowhere since 2014. By contrast, mid and small cap stocks only began to trade sideways since 2018.

We can see that in the valuation of US large, mid, and small cap stocks. Their forward P/E ratios are either in the high teens or low 20s, which are elevated by historical standards.

From a global perspective, the forward P/E ratios of non-US regions are far lower than US stocks.

That said, too many investors are fighting the last war. The latest episode of US large cap growth dominance cannot be compared to the dot-com mania. The late 1990’s boom was led by unprofitable companies trading on price to eyeballs metrics. I would argue that the best comparable period to today is the Nifty Fifty era of the early 1970’s, when investors were willing to pay for quality growth at any price. The growth companies then were highly profitable, just as they are today. As a reminder, the S&P 500 went sideways for roughly a decade after the Nifty Fifty bust, though investors could have profited handsomely through sector and style rotation.

The dominance of Big Tech growth stocks is evidence that the stock market isn’t the economy, and the economy isn’t the stock market. Looking ahead to the next 12-18 months, the economy should see definitive signs of recovery by Q2 or Q3 2021. New Deal democrat has been keeping an eye on the economy with his suite of coincident, short leading, and long leading indicators. He has been making the point that his indicators tells the story of an economy that wants to recover, subject to progress against the pandemic.

All three time frames are positive, although the nowcast is only slightly so.

It is really unfortunate that right now was the precise time reporting stopped on one of the consumer spending metrics, as the other (Redbook) went just slightly negative this week, “possibly” reflecting the termination of federal emergency unemployment benefits. To reiterate my overall outlook, over the next six months, the coronavirus, and the reactions of the Administration (both present and possibly new in January), the Congress, and the 50 governors to the coronavirus, are going to be the dispositive concerns. Nevertheless, by late next summer – especially if there is a reasonably effective vaccine – I expect the economy to be firmly in expansion.

Several Phase III vaccine trials are underway. Despite the AstraZeneca trials being put on hold, my base case scenario calls for availability of a vaccine by mid-2021. While there will inevitably be some teething problems with distribution, vaccine availability, or the anticipation of availability, should be the catalyst for an economic recovery. I would add that the fight against the pandemic needs to coordinated, and global in nature. As Bill Gates has pointed out, we don’t need the virus to be hiding in some pockets of the world and act as a reservoir for COVID-19 to infect others. Control and eradication needs to be global.

In the short run, the risk of a double-dip recession is rising due to fiscal inaction. High frequency data shows that the job recovery is stalling, 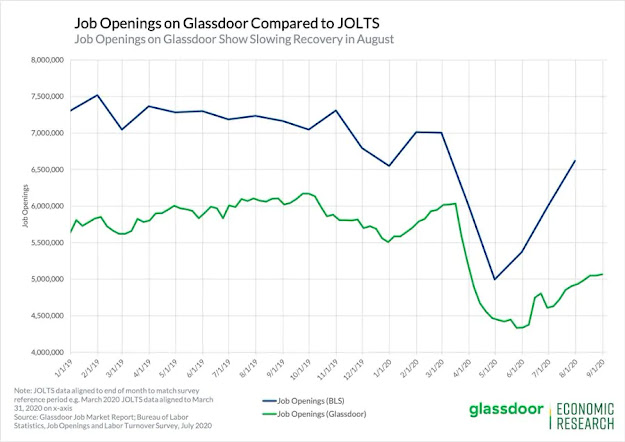 Initial jobless claims have bottomed and they are rising again.

The fiscal stimulus jolt is fading badly. Bloomberg reported that the extra $300 per week authorized under Trump’s Executive Order is running out of funds.

Funding is drying up for the supplemental weekly jobless benefit payments authorized by President Donald Trump at the start of August.

Funding for the Lost Wages Assistance program, which authorized an extra $300 a week from the federal government to most jobless benefit recipients, will not extend beyond the benefit week ending Sept. 5, according to statements by government officials from Montana, Texas and New Mexico. The states said they were informed Wednesday.

That said, most of these problems can be mitigated by a fiscal stimulus bill, either in the next few weeks or by a new Congress after the election.


Where are the opportunities?

Notwithstanding the short-term risks, a NASDAQ crash argues for a rotation into cyclical and value stocks. We are already seeing constructive patterns of relative performance among material, energy, and industrial sectors.

From a global perspective, non-US stock markets provide greater opportunities from both valuation and sector exposure perspectives. An analysis of the sector weight differences between the S&P 500 against MSCI EAFE (developed markets) and the MSCI Emerging Market Free Index shows that the S&P 500 is heavily overweight technology and communication services. EAFE is overweight value (financials) and cyclical sectors (industrials, and materials). EMF is overweight value (financials) and cyclical sectors (consumer discretionary, materials, and energy).

If the market were to experience a rotation from technology into value and cyclicals, non-US markets should benefit substantially from that shift.

We began this journey by posing the question of downside equity risk. If this is the start of a significant pullback, how far can stocks fall?

We can analyze the S&P 500 from several perspectives. While the S&P 500 does not represent the economy, the average stock, as measured by the Value Line Geometric Average, is a better representation. If the two were to converge, fair value for the S&P 500 would be about 2300, with the caveat that markets can overshoot on the downside.

If we were to analyze the market using the forward P/E ratio, it has historically bottomed out at a forward P/E of 10-15 times, and mostly at about 10. The main exception was the 2002 bottom, which was about 15 times.

Putting it all together, my base case downside risk for the S&P 500 is 2000-2300, with a possible overshoot to about 1700 if the market were to really panic. This does not necessarily mean that the market will fall that far as it is based on the assumption of a NASDAQ and large growth stock crash. US equity investors can be largely insulated from the downdraft and find opportunity in cyclical and value stocks. Global investors will find more upside potential in non-US equities, with a particular focus on emerging markets.

Cam Hui has been professionally involved in the financial markets since 1985 in a variety of roles, both as an equity portfolio manager and as a sell-side analyst. He graduated with a degree in Computer Science from the University of British Columbia in 1980 and obtained his CFA Charter in 1989. He is left & right brained modeler of quantitative investment systems. Blogs at Humble Student of the Markets.
My articlesMy siteMy books
Follow on:TwitterLinkedINGoogle +Seeking Alpha
Previous The story of two trend breaks
Next The bears take control, but for how long?