Don’t count on a V-shaped recovery

by
Cam Hui
My articles My siteMy books
Follow on:TwitterGoogle +LinkedIN
Seeking Alpha
Summary:
The covid-19 coronavirus outbreak is a human tragedy, just like Ebola, MERS, and SARS. For investors, it has an economic impact. Even before the outbreak, world merchandise trade volume had been falling. New data is likely to show that the outbreak disrupted global supply chains sufficiently to further depress global trade. The market consensus initially expected the effects of the virus to top out in mid or late February, and they consequently penciled in a V-shaped recovery. As China slowly returns to work amidst draconian measures to control the outbreak, doubts are rising on whether China’s economy could bottom out in Q1. The authorities would have to be satisfied that the worst of the infection is over before giving the all-clear for everyone to return to work. An economy as

The covid-19 coronavirus outbreak is a human tragedy, just like Ebola, MERS, and SARS. For investors, it has an economic impact. Even before the outbreak, world merchandise trade volume had been falling. New data is likely to show that the outbreak disrupted global supply chains sufficiently to further depress global trade.

The market consensus initially expected the effects of the virus to top out in mid or late February, and they consequently penciled in a V-shaped recovery. As China slowly returns to work amidst draconian measures to control the outbreak, doubts are rising on whether China’s economy could bottom out in Q1. The authorities would have to be satisfied that the worst of the infection is over before giving the all-clear for everyone to return to work. An economy as large as China’s will not be able to restart itself overnight, and the process will take time. In the meantime, much damage has been done, both to global supply chains and Chinese company balance sheets, and a wave of insolvencies is likely to follow. The only question is the magnitude.

As well, fear has to fade for business confidence to return to normal. The latest statistics from Johns Hopkins CSSE shows that the growth of covid-19 cases is not under control outside China. Equally disturbing is the challenges faced by two First World economies, Japan and Singapore, to deal with the outbreak. What happens when the infection appears in countries with health care systems that are less prepared?

It is therefore difficult to believe that the economic impact will bottom out in Q1, or the economic recovery will be V-shaped.

The SCMP recently published an article that documented the struggles Chinese factories have encountered in reopening their doors.

Choked off from suppliers, workers, and logistics networks, China’s manufacturing base is facing a multitude of unprecedented challenges, as coronavirus containment efforts hamper factories’ efforts to reopen.

Many of those that have been granted permission to resume operations face critical shortages of staff, with huge swathes of China still under lockdown and some local workers afraid to leave their homes. Others cannot access the materials needed to make their products, and even if they could, the shutdown of shops and marketplaces around China means demand has been sapped.

Those who manage to assail the challenges, meanwhile, have found that trucking, shipping and freight services are thin on the ground, as China’s famed logistical machine also struggles to find workers and navigate provincial border checkpoints that have popped up across the country “It really is death by a thousand cuts,” said John Evans, managing director of Tractus Asia, a company that has 20 years’ experience helping firms move to China, but which over the past two has had more enquiries from businesses looking to leave. “This is a black swan event and I don’t think we’ve seen anything like it in recent history, in terms of the economic and supply chain impact in China and across the globe.”

One key indicator of economic disruption shows that few migrant workers have returned to work.

Based on the Baidu Migration Index, analysts at Nomura estimated that only 25.6 per cent of migrant workers had returned to work across 15 sample cities by February 19, compared to 101.3 per cent a year earlier.

One company reported that it had to make special and extraordinary provisions to get their workers back.

Dimitrijevic said he had to charter special buses to transport his workers from other parts of China back to Suzhou, a city west of Shanghai. When they returned, he had to book hotel rooms to house them for another 14 days in quarantine as their neighbours “will not let them go home”. He was paying about 350 yuan (US$50) in accommodation for each employee.

“While work has officially started last week, most employees were still quarantined or just on their way back due to lack of transport,”
Dimitrijevic said. “It would be about a month in production delays by the time we start next week, and by then we would not even be able to run full operations.”

Progress has been uneven, even when factories return to full production, transportation logistics is another bottleneck.

“China is so big, that every city can have vastly different policies,” said Walter Ruigu, Beijing-based managing director at Camal Group, which connects Chinese manufacturers of steel, equipment for construction and mining, and industrial chemicals with buyers in Africa.

“The distance from the epicentre and local government actions have been crucial. In the north and northeast activity has resumed this week. We have seen some movement in Dalian Port and Qingdao Port, but for now the issue has been finding the logistics to get to that point,” Ruigu said.

China tries to get back to work amid coronavirus outbreak There have been reports of cargo ships being marooned at sea, with ports in countries with strict coronavirus quarantine rules such as Australia, Singapore and the United States not permitting shipping personnel to enter their ports if they have been in China over the past 14 days

All of these disruptions will have a cost. Bloomberg reported that some Chinese SMEs can’t afford to pay their employees. We have yet to see the effects of the financial fallout from this outbreak.

A growing number of China’s private companies have cut wages, delayed paychecks or stopped paying staff completely, saying that the economic toll of the coronavirus has left them unable to cover their labor costs…

Across China, companies are telling workers that there’s no money for them — or that they shouldn’t have to pay full salaries to quarantined employees who don’t come to work. It’s too soon to say how many people have lost wages as a result of the outbreak, but in a survey of more than 9,500 workers by Chinese recruitment website Zhaopin, more than one-third said they were aware it was a possibility.

The salary freezes are further evidence of the economic hit to China’s volatile private sector — the fastest growing part of the world’s second-biggest economy — and among small firms especially. It also suggests the stress will extend beyond the health risks to the financial pain that comes with job cuts and salary instability. Unsurprisingly, hiring has all but ground to a halt: Zhaopin estimates the number of job resumes submitted in the first week after the January outbreak was down 83% from a year earlier.“The coronavirus may hit Chinese consumption harder than SARS 17 years ago,” said Chang Shu, Chief Asia Economist for Bloomberg Intelligence. “And SARS walloped consumption.”

Do you still believe in a V-shaped recovery? What about the tooth fairy?

As a way of quantifying the outbreak, an IMF study estimates that a 1% increase in imports of fragile products from a disaster-hit country, such as Japan after the 2015 earthquake that devastated Fukushima, causes a -0.7% supply shock by the importing country. Fragile products are defined as products with presence of central players, a tendency to cluster, and a lack of substitution. The widespread acceptance of just-in-time (JIT) techniques represents a form of operational leverage, which works both on the upside and downside.

FactSet also produced some useful analysis comparing the SARS epidemic to the latest covid-19 outbreak. First, it compared the China exposures of companies in the MSCI All-Country World Index (ACWI) by domicile and by revenue source. Only 4.0% of the companies in ACWI are domiciled in China, while 9.0% are exposed to China based on their revenues. Consumer Discretionary and Technology stocks show the biggest difference between domicile weight and revenue exposure weight. 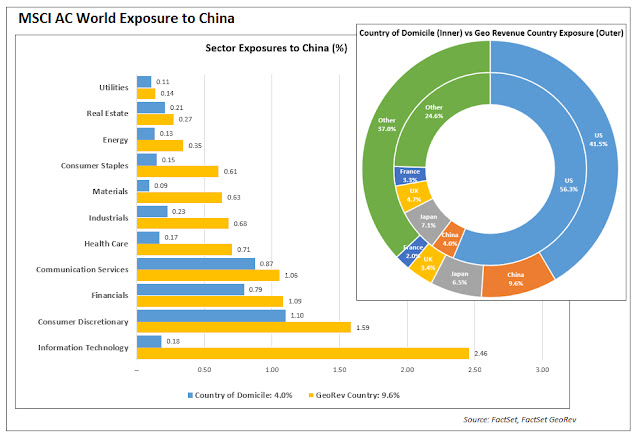 FactSet went on to stress test three scenarios and their effects on stock market performance.

The table below summarizes the downside potential of the three scenarios. We can more ore less rule out the “optimistic scenario” based on the anecdotal evidence of supply chain disruptions. Pencil in a 5-10% correction in equities based on FactSet’s analysis.

FactSet’s analysis is based on historical patterns and average correlations. I would argue that equity prices in general, and US equities in particular, are even more vulnerable than the conclusions from based on this conventional approach.

First, valuations are highly stretched. The market reached a forward P/E ratio of 19.0, which is a level last seen in 2002 as prices deflated from the Tech Bubble of the late 1990’s..

As well, bullish sentiment is becoming stretched. The latest BAML Global Fund Manager Survey shows that global institutions have been piling into equities, which makes them vulnerable to a negative growth surprise such as the covid-19 outbreak.

In particular, the US market has been a favored destination for equity fund flows.

I am also monitoring the relative performance of the US and EM markets against ACWI. Tactically, traders may want to make a commitment to this trade once the EM/ACWI ratio stabilizes on bad news, indicating a washout. As well, weakness in the US/ACWI ratio would be a signal that fears of a global slowdown are beginning to appear for US investors, and the bears are taking control of the tape.

Investors focused on absolute returns may want to consider buying US long Treasuries. The long bond ETF (TLT) broke out of a downtrend in January, and it further rallied to stage another upside breakout, indicating more profit potential.

Gold prices also achieved an upside breakout, but the move is extended, and Commitment of Traders futures data shows a crowded long position. Fear trade buyers could take a position, but they need to be aware of their vulnerability due to excessively bullish sentiment.

Cam Hui has been professionally involved in the financial markets since 1985 in a variety of roles, both as an equity portfolio manager and as a sell-side analyst. He graduated with a degree in Computer Science from the University of British Columbia in 1980 and obtained his CFA Charter in 1989. He is left & right brained modeler of quantitative investment systems. Blogs at Humble Student of the Markets.
My articlesMy siteMy books
Follow on:TwitterGoogle +LinkedINSeeking Alpha
Previous Why this time is (sort of) different
Next Correction ahead?