by
Jeffrey P. Snider
My articles My siteMy booksAbout me
Follow on:Twitter
Seeking Alpha
Summary:
Much of the original thesis on economic decoupling surrounded myths of what were believed invulnerable economies. Emerging markets might see some slowing during 2008, but they weren’t supposed to drop off. China was right at the top of everyone’s list, the unstoppable force then transforming the world’s political as well as economic order. In the early months of the Global Financial Crisis (how was it global, again?), that was how it went. The US and much of Europe were in deep trouble. The Chinese, it seemed for a while, would easily get by. Then, seemingly out of nowhere, in July 2008 everyone was drawn in – emerging as well as developed market economies. It was the dollar’s doing. By August 2008, China’s vast and rapidly growing industrial sector came to a standstill. Or, what passed

Much of the original thesis on economic decoupling surrounded myths of what were believed invulnerable economies. Emerging markets might see some slowing during 2008, but they weren’t supposed to drop off. China was right at the top of everyone’s list, the unstoppable force then transforming the world’s political as well as economic order.

In the early months of the Global Financial Crisis (how was it global, again?), that was how it went. The US and much of Europe were in deep trouble. The Chinese, it seemed for a while, would easily get by.

Then, seemingly out of nowhere, in July 2008 everyone was drawn in – emerging as well as developed market economies. It was the dollar’s doing.

By August 2008, China’s vast and rapidly growing industrial sector came to a standstill. Or, what passed for a halt in EM terms. GDP would decelerate to unthinkable levels – less than double digits!

Most nations would envy that rate. But 9 percent growth will make it much harder to supply jobs to the millions of Chinese moving to cities from rural areas in search of work. And any slower growth could prove a shock to workers who have been receiving double-digit pay increases each year, as companies struggle to find enough labor to keep factories open.

Rate of change is everything. We are conditioned instead to think about absolute numbers; minus bad, plus sign good. The truth is bad or good are not determined by the relationship of growth to zero, rather the one with the baseline. In 2008: single digit GDP or Industrial Production was a minus sign.

It’s odd looking back how that was once a pretty widely shared perception. Over the years since, it seems how even those who more closely follow China (and the rest) have so rationalized what is still an otherworldly situation. Sustained single digits and worse; maybe half the level of ten.

The dangers were perhaps better appreciated back then because of a simple insight into how we all think about these things. A shock change is perceived very differently than the boiling frog of the fable. In 2008:

“It’s the speed of the deceleration that scares people,” says Liang Hong, a Goldman Sachs economist who said she recently surveyed companies in China.

“Growth is deteriorating fast,” says Andrew Driscoll, a China resource analyst at CLSA, the investment bank. “We’re not talking about China’s growth going backwards. But when supply is geared toward 10 percent growth, and it comes down to 5 percent, you have excess supply.”

What many may not realize is that the time component actually works backward, almost inversely to these very good descriptions. What I mean is, the same thing is true whether it happens all at once or slowly over time – especially when people’s baseline expectations don’t change.

If you see growth falling quickly to 5% even though you are geared toward 10%, that’s a shock and it’s bad. But the speed may work in your favor (economic symmetry); you only have to hold on for so long before you get back to 10% again. Can you survive a few months, maybe a year until that happens?

This is a finance as much as industry/business question.

But what happens if/when you keep expecting 10% but growth drops to 9%. Then 8%. Perhaps 7%. Followed by 6%. And finally back to 5% like at the worst of the GFC. There aren’t any heated, hyperventilated articles passed throughout the world panicking over the situation.

Common sense says you are supposed to renormalize to that lower trajectory. Economics, however, combined with politics depends not on common sense.

Economists would rather you stay fixed to 10% growth expectations, or better. Government officials would very much like you to believe in the chances for double digits, too. They might even ask (read: not ask) your local bank to keep up friendly financing terms even though your more rational banker can see no realistic pathway back to the black so long as you keep up your 10% capacities.

In this kind of situation, it’s not really the boiling frog – it’s zombieland. The longer you stay fixed dreaming of, and supplied with the debt more appropriate for double digits, the worse it will get. The risks rise especially in finance not directly attached to Communist targets (like those who might provide “external” money via eurodollar channels).

It is a slow-motion train wreck, a self-reinforcing prison. Like Jefferson once said, holding a wolf by its ears; the Chinese can’t really hold onto the dream of double digits safely, but they don’t dare let people let go of them, either.

It wasn’t the lowest on record last month, but it really was. There were two other occasions when growth of Chinese Industrial Production was less, but those were both prior February’s so you know what that really means (Golden Weeks). According to China’s National Bureau of Statistics (NBS) yesterday, IP gained just 5.0% year-over-year in May 2019.

Had that number been posted in November 2008 or so, it would’ve sent shockwaves throughout the world. Yet, doesn’t it actually matter more that rather than deteriorate rapidly, growth is dying this slow, dragged out death? A temporary if still deep disruption from real growth is very different than the total absence of it, and no reasonable hope for it. Given a pick of only these choices, you take 2008 every single time. If that doesn’t get your attention…

The other two of China’s Big 3 numbers draw the same picture. The Western media can keep writing up stories about the PBOC’s massive stimulus, it won’t make it any more true. It is a false impression of which massively downplays the economic wolf being precariously held at bay by an alarmed, and disturbed, polity.

Retail Sales managed to rebound in May from its record low last month, rising 8.6% year-over-year. But again, the false impression; 8.6% sounds like a rebound when compared to 7.2%, as was growth in April. Compared to the US which can’t even manage better than a recession-level 3%, it might seem like paradise.

China’s real problems only begin with these sectors. By far, the greatest danger the country faces is the very distinct continued absence of its building impulse. The private sector refuses to build up more of what the Chinese interrupted demographic transformation requires. In specific terms, Private Fixed Asset Investment just isn’t there.

Private FAI decelerated to just 5.3% on an accumulated basis (YTD, essentially). It hasn’t been this low since 2016. 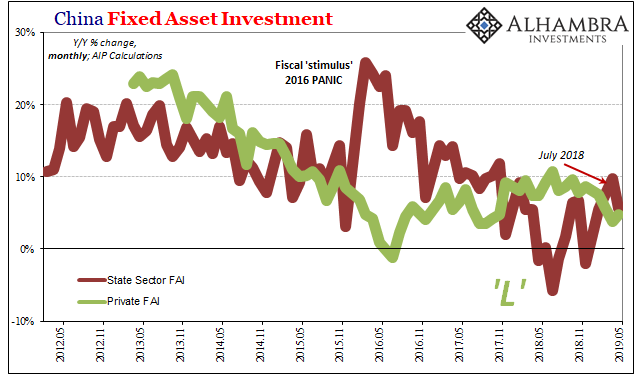 What may surprise people is how the government isn’t stepping in for the difference. That’s not how it’s told in the media, of course. Unlike 2016, there is no big fiscal intervention, no massive spending program to fill in the gap until the economy rebounds – as had been done twice before in 2008-09 as well as 2012. Because it had been twice before already, three times in the last decade, that offers a pretty big clue.

Why is the government refraining from revisiting the rescue plans?

Unlike the Western media, Communist authorities have, in fact, renormalized to a very different baseline. I would further argue that when they did, the government actually kickstarted the external finance sector’s own renormalization process, too. There are no more double digits in China’s future. This makes dollars more expensive for China’s synthetic short, and everyone else’s incidentally, which makes economic circumstances that much more difficult, which altogether squeezes the vise that much tighter.

China’s monetary stimulus, therefore, is only intended to keep the grip from completely choking everything off all at once; managed decline, not the key ingredient for rebirth. Huge, huge difference.

Ten and a half years ago, 5% for Chinese industry and 6% for GDP would’ve added substantially to the already severe global panic (how was it global, again?) Today, it’s as normal as the sunrise. And that is so, so much worse.

As Head of Global Investment Research for Alhambra Investment Partners, Jeff spearheads the investment research efforts while providing close contact to Alhambra’s client base. His company is a global investment adviser, hence potential Swiss clients should not hesitate to contact AIP
My articlesMy siteMy booksAbout me
Follow on:TwitterSeeking Alpha
Previous Retail Sales (US): Green Shoots Under the 3% Line?
Next US IP: May Was A Good Month And It Was Still ‘Manufacturing Recession’

#WhatYouMissed On RIA This Past Week